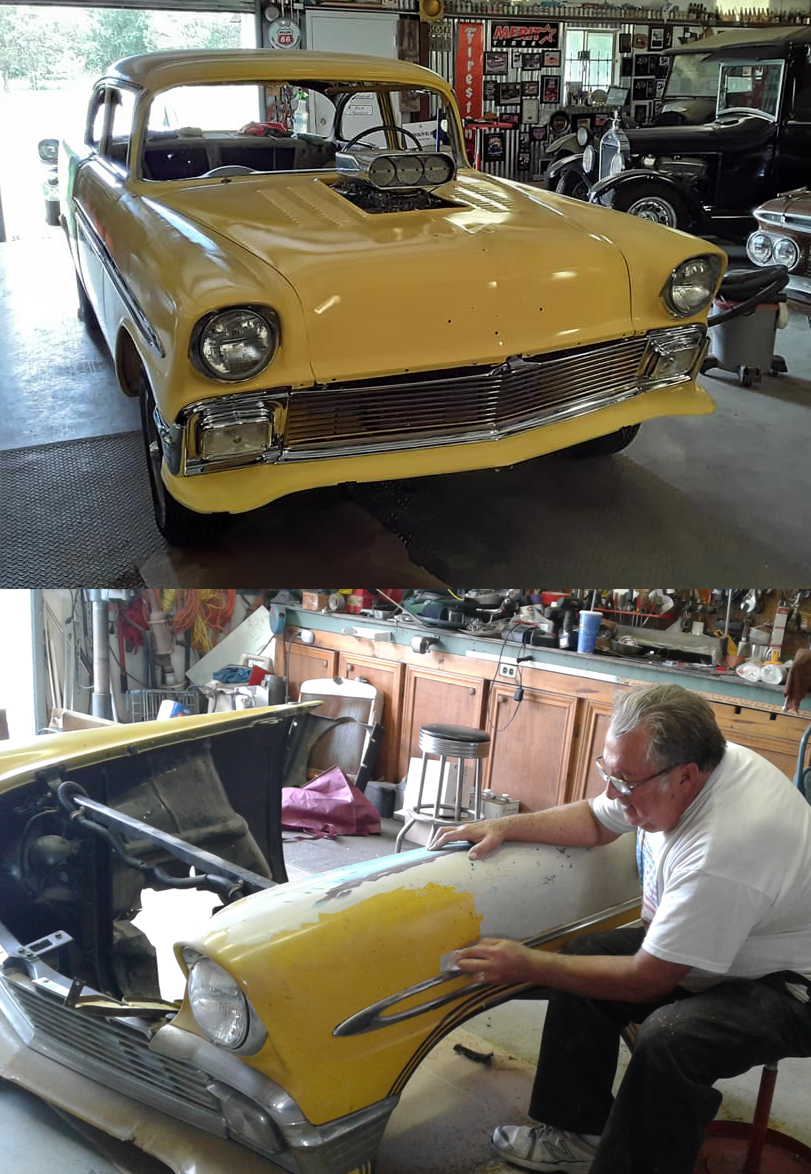 In 1981 I purchased a 1956 Chevy Bel Air 2-door Sedan. The main reason I bought this car was because the green 56 I had was undergoing a frame-off restoration and I was missing out on Club events. This Chevy was in running condition with only having to do some small wiring repairs. The car came from Waco, TX. At that time the CTCCC, Central Texas Classic Chevy Club was involved with a car Auction Company at the Austin Coliseum. I bought the car before it went up for auction.

The engine was a 402 Big Block with a turbo 400 tranny. I attended many Rod Runs with it during the first few years. Then the engine blew up and I needed another 402 for a replacement. The 402 was a Chevrolet error that came out in the early 70’s and was a good strong engine. It was a 396 over bored by the factory.

The car had dual 4 barrels on a high rise manifold that stuck out of the hood. A real eye catcher standing still or driving down the road, it was sharp.

The car made many shows and also many Lone Star Chevy events. Just prior to the Waco show back in the 1980’s. the car got stolen from out in front of my north Austin home. The car was on a trailer from just returning from the Austin Car Show and since it was icy and very cold when we got home that day, I decided to leave it on the trailer and locked the tongue hitch till I got home from work on Monday. On Monday at work, my neighbor called me and told me that someone was hooking onto the trailer and appeared that they were stealing it. She approached them and they told her to mind her own business, that’s when she called me. I rushed home and sure enough the car and trailer were gone. Lucky that I had insurance on the trailer but not on the car for theft. I was very angry. I called the cops and they made a report. Insurance paid me for the trailer. A week later I received a call from Travis County Sheriff asking me if my yellow 56 was stolen. I told them yes and then they told me they found it in a field off Ferguson Lane in North Austtin. The Sheriff told me that three boys were riding their bicycles around a large dirt pile when they saw men doing stuff to the car. The guys chased the kids away with a shotgun. One of the kids was the son of a County Sheriff and told his dad. The Sheriff Dept came out and recovered the car. I do not know what happened to the men.

When I got the car it was pretty messed up. The new engine was blown up, the tranny was leaking, the trunk was damaged where they tried to break into it. The dash was messed up from the ignition switch damage, and the interior was torn. But I got the car back. Once again finding another 402 was not easy. Yes I could have replaced it with a 396, 454 or a small block, but no, I wanted a 402 as they were unique.

I got the car back running again with the help of Jerry Dixon. I drove the car for many years as it was until I decided to refresh the car with new paint, and interior. As of October in 2018 that day came. I stripped the car and started in for a minor project. Well that minor project wasn’t so minor. I started spending big money buying parts to replace. My wife says to me all the time, I thought that you were just doing minor repairs. Well you just can’t do a little, you need to get into it. So with new paint and a new rebuilt 396, I started to attach the car starting with the body and paint and buying parts all the time.

Still at it today hoping to get the project done and ready for Crusin’ The Coast show in Mississippi this year.