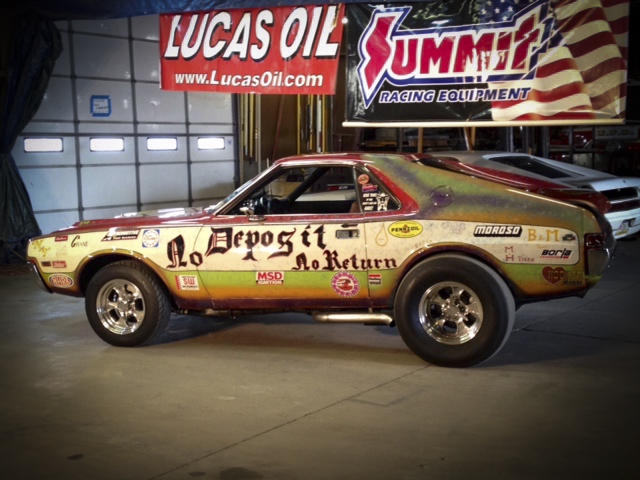 I started building hot rods at an early age, perfecting my art in a make shift back-yard garage; wrenching American steel with nothing more than a set of basic tools and a dose hot rod sensibility to create one off street machines. I turned to building hot rods after going through a rough patch in my life. In order to get my mind off my troubles, I decided to build up a hot ride to help keep my brain, and hands busy. The creative process, along with a lot of knuckle busting gave me piece of mind, and peace of heart as well, which helped ease my troubles. It was then and there I decided to create a one-off, over the top l/4 mile ground-pounder.

I had admired one of my buddy’s loveliest possessions by afar for quite sometime … well, not my friends best girl… no way. It was his fresh ’68 AMX he had purchased brand new. Since the day I laid eyes on it, I had admired the lines of the car, along the performance to weight ratio… and of course the fact that it wasn’t you’re run of the mill Mustang or Camaro. It was something different, and in my mind that “difference” could become something pretty special with a little massaging in the garage.

So after a year of owning the car, my wishes came true… my buddy and his AMX were breaking up. I pounced at the chance of ownership of the 390ci motorized street terror. After a brief stint at the bargaining table, the ride was on its way to my place for its transformation from a strong running street car, into its new Super Stock drag machine. 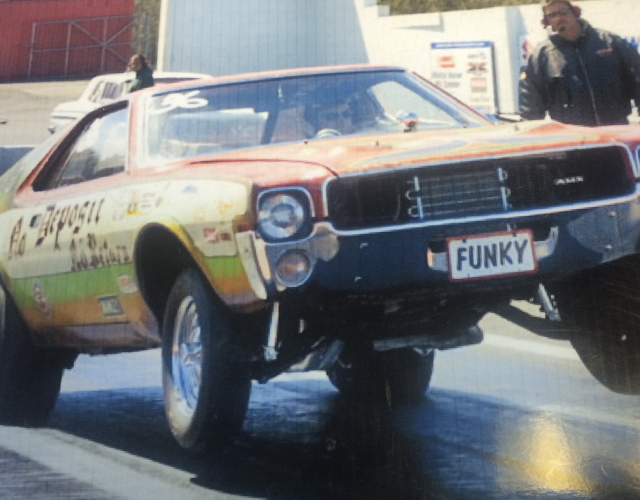 Not having an ideal place to work on the car, I ended up renting a $40 month garage in one of the back alleys of Lancaster, PA to do the work on the car. Not having the money to stock a shop with nifty tools, I built my own compressor to run the spray guns, which would cover the car with its new skin. Along with my small set of basic tools, the only other components in the garage was a small overhead light, and a handheld drop light to help me see what I was doing in the vintage garage. It’s with these basic tools that I created one of the coolest paint jobs this side of the Susquehanna.

I sprayed the ·wild graphics on the car after conjuring up the overall theme in my head. After doing the basic design on the car, complete with a totally custom AMX logo on the hood, I wanted to add a little bit of pizazz to the car. With that in mind, I loaded the spray gun up with some lacquer and pointed the gun up in the air, above the body. Using short bursts, I shot lacquer in the air, having it partially dry into long “silly string” type strands, and let it drape over the car in an erratic pattern. The “strings” then leveled off and dried nicely. I did have to do a little wet sanding here to get them to sit totally level with the rest of the paint.

I had to name the ride. While standing around admiring my new ride, a young lady friend of mine with an affinity for cold Coke suggested the moniker, “No Deposit, No Return” after reading it off the bottom of her cola bottle. Even though the name made no sense, the name just stuck with me. At that moment he knew that’s what it had to be. So a buddy mine, Steve picked up a brush and started lettering the slogan on the sides… the rest is history. Unfortunately later on Steve was stabbed to death in Lancaster, helping out as a Good Samaritan trying to break up a street fight. But his memory now lives on in the graphics he had drew on the flanks of this ride. While this artistry was going on, the motor was pulled and was tore down for a rebuild. The block was taken to Hills Performance where Charley Hill himself bored the block 0.030 to clean up the cylinder walls. The stock pistons were removed and in their place a set of 12:1 J&E Pistons were placed in the cylinders. The heads remained pretty much stock, except for the extra bolts added by Charley. To shift the gears, a B &M Hydro trans with a 5000-rpm stall was added. Hooker headers rounded out the performance features.

I ran a pretty much stock suspension; except for the traction bars I made and installed himself. The rear was a factory unit with a new set of gears installed, and a set of Henry’s Hardened axles. M and H slicks connected all that power to the 1/4-mile blacktop.

I ran the AMX up and down the east coast, taking numerous trophies and a little cash along the way. The car ran 11’s, and overall was pretty successful. Unfortunately though, the money started to run out, and without financial support to keep it running, I had to shut down my racing until I could once again support my 1/4-mile habit. Turns out after three years of driving the car I decided to part with my ride and move in a different direction in my life… though I knew deep inside it was probably not the last time I was going to see my little AMX. 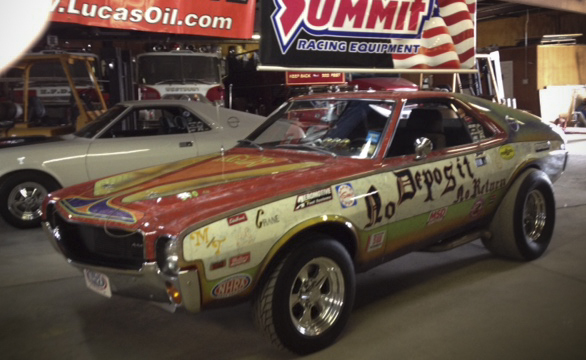 Thirty-three years later, George Gudat, an avid AMC collector from New Jersey finds the “No Deposit” car in a barn in Pennsylvania, very close to where I had built the AMX. He immediately wanted to know the history of his new ride, and luckily had some clues to go by …like my name on the door! After four failed attempts to locate the car’s builder, the fifth call was right on target. He asked me if I had raced a 68 AMX during the late 60’s and early 70’s. I answered “yes”. He asked me what was the name of the car…. I answered “No Deposit, No Return”. He then told me he had just purchased my old car, and if I was interested, I could come take a look at it when he comes out from Jersey to pick it up.

I was ecstatic with this news, as I had tried for years to locate my old car to no avail, searching with just verbal clues on its whereabouts. Amazingly, the car never went far from my home, which was even more perplexing. The local kid I had sold it to bought the car to use as a magnet for picking up girls, figuring the wild paint and hot motor would drum up some cuties. Unfortunately, all the hormonally influenced teenager got in the few months he drove it was a pile of speeding tickets! Then the young Casanova blew the AMX’s engine, and it was soon parked in its barn ‘tomb’, in which it sat alone for 33 years waiting for someone to resurrect it from the dead.

I had always told my sons of my glory days with the AMX, and now I could show them first hand how I put the car together back in the glory days of muscle cars. We hit the road and met up with the new owner. Amazingly, the car looked great for its age, needing just a clean up to get the paint shining again. I was blown away with seeing my old ride, and offered to buy the car back on the spot. George told me that he wanted to get the car running again, and bring it back to the track for at least a year, and maybe after the season he would think about selling it.

George put his own motor, trans and rear in the flashy AMX and took it to the pavement, running muscle car nostalgia events all across the east coast in 2006. With his set up, the car almost broke into the 9’s, which makes for a pretty potent racecar.

Three-quarters of the way through the race season I got the call I was waiting for… George was open to selling me the car back. A deal was struck and after the season ended, the roller AMX was back home at my shop in Lancaster…where it all started. 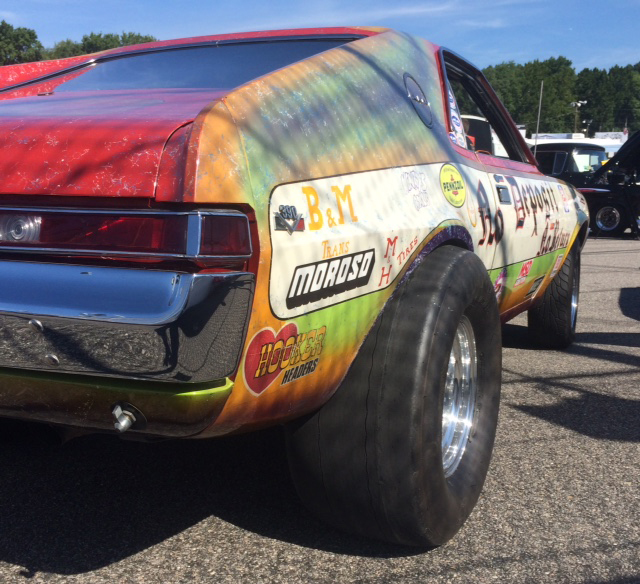 First thing I had to do was get a motor together to motivate my new/old ride. I went to the very successful and respected local engine builder Ron Krimes of Krimes Automotive in Ephrata, PA to do the motor work. First off, a 401 block was located and bored 0.030. A stroker crank was added which stretched the motor out to 424ci. Aluminum rods, 12:1 pistons, Edelbrock heads and intake, and roller cam with roller rockers were added to the mix. A Milodon 8 quart oil pan keeps the big engine lubed up while a modified 727 trans with a Gear Vendor under/overdrive shifts through the gears.

Up top, a Holley 950 double pumper gets the fuel/air ratio just right, and uses a 6psi fuel return system, grabbing octane from a fuel cell out back. The sparks, which ignite this ride, are supplied by a MSD ignition. Out back, the rear is a Detroit Locker with 4:11 gears and hardened axles. Once again M&H slicks run the car at the track, while MT street legal slicks see local road use. Four-wheel discs now handle all the stopping power, and front and rear 1 1/16 sway bars now reside underneath the car. The original build of the “No Deposit” car had a stock cooling system. I decided to upgrade the system due to the fact that I now would be driving it on the streets. It now sports an aftermarket aluminum radiator cooled by twin electric fans, and is supplied coolant by an electric water pump.

I’m more than just happy, the car sees plenty of action, and I routinely get the AMX out on the rural roads, open up the big Holley and get the big slicks heated up. The car also makes the rounds on the nostalgic racecar circuit, and has also hit the Turkey Run in Daytona as well as major events all over the east coast.

I even received an interesting phone call after completing the car. Seeing the car posted on the Internet, the young lady who came up with the cars moniker contacted me out of the blue. Not only was she shocked that I was in possession of the car, but she also could not believe the pristine condition the paint was in!

At 70 plus years old I’ve still got the heart of a teenager and still have a lead foot as the little two-seater responds to my every command like its a extension of myself. I’m so in love with AMC’s little hot rod that I built myself another one, decked out in white, which serves as the antithesis to the loudly painted racecar. I will never part with my first dose of AMX infatuation, and luckily this car made its “return” to where it should be…in the loving hands of its builder.

Want to share your own ride with us? Send a photo and your story to MemberRides@ClassicCarRestorationClub.com.