I was asked by a good friend for assistance resolving some electrical problems he was having with his 1949 Ford F1 pickup. Even after searching awhile, I could not locate the fuse block. Where is the fuse block located?

Cars and trucks prior to the 1960s seldom have what we usually recognize as a fuse block. Rather they have two, three, or four circuit breakers that look like little metal boxes with a couple of threaded studs sticking out of them. On the ’49 Ford F1 the breaker is sort of 2-in-1, but it’s still a block with metal posts sticking out, and wires attached (see photo). 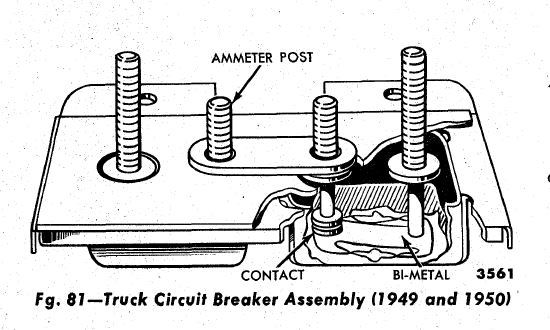 Many times the circuit breakers are tucked beneath the dash or behind the kick panel cardboard and occasionally mounted to the outside firewall or inline. There will also be some electric devices that have inline fuses (i.e. radio, blower motor, clock, etc.). I believe your circuit breakers are under the dash on the right side of the instrument panel, but it’s been a while since I last worked on an F1, so crawl under and take a look.