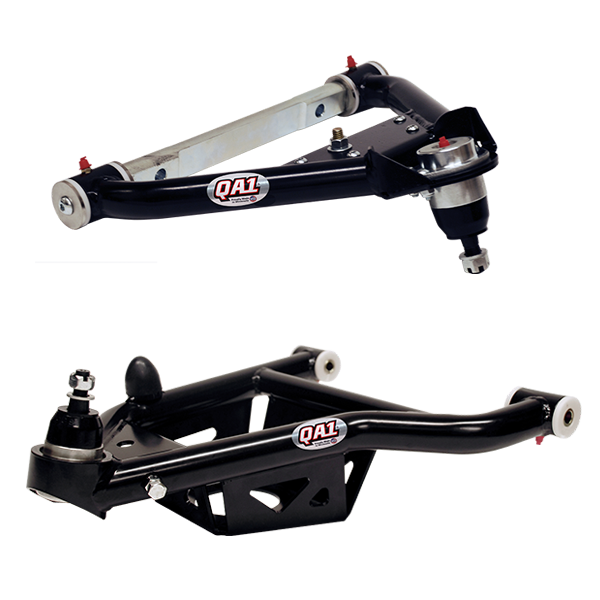 QA1 announced an expansion of their offerings for 1973-1977 GM A-Body vehicles with their new front upper and lower control arms and rear upper and lower trailing arms. Together, these products provide better handling for drivers with a Chevelle, Monte Carlo, Cutlass, Regal or other GM A-Body.

The upper arms feature an offset cross shaft, letting you quickly and easily adjust camber. All of these arms work with stock or dropped spindles and are designed to add 3 to 4 degrees of caster and 0.5 to 1 degree of negative camber when used together to get the most out of modern performance tires. These control arms are designed to work with QA1 front Pro Coil Shock Systems; a bolt-in spring adapter is available to allow use with stock springs.

Complement these front control arms with upper and lower trailing arms for the rear, which keep the tires planted firmly on the ground for improved traction and a more predictable, better handling car.

Upper trailing arms are available in either tubular or adjustable styles. The tubular arms offer increased strength, while the adjustable arms allow easy pinion angle adjustments without having to remove the arms from the vehicle. Lower trailing arms are available in a boxed style for maximum strength and flex elimination and include mounting points for an OE style sway bar.

The upper tubular and lower boxed trailing arms use polyurethane bushings on both ends, while the upper adjustable arms use a spherical ball or rod end assembly with UHMW polyethylene bushings on the chassis end to eliminate bushing bind. For a long-lasting finish, tubular and boxed trailing arms are powder-coated gloss black, while adjustable arms are zinc plated and anodized.